Delivered in a PDF format, 42 pages.

While other countries move to reduce or eliminate nuclear generation, China has been rapidly expanding it. With 27 reactors under construction, its installed nuclear capacity is expected to more than double by 2020. The Hongyanhe facility is one example of nuclear’s growth in China and represents multiple firsts.

Think your nuclear plant faced delays and obstacles? India’s Kudankulam project, Unit 1 of which begins commercial operation this month, spent 26 years in development and construction and faced down obstacles that included a seven month blockade by protesters to become the nation’s largest nuclear plant.

Bringing four units back online and extending the life of four sister units has made the Bruce Nuclear Generating Station the largest operating nuclear plant in the world. The investments to bring the plant back to full power have also helped enable the province’s phase-out of all coal generation.

Adding nuclear capacity doesn’t require constructing a new plant. A few aging plants are in the process of retirement, but much of that capacity will be replaced with new plants under construction in the future and by upgrades of existing plants today. Florida Power & Light recently completed a series of four major nuclear plant upgrades that have added 500 MW of capacity to its fleet.

Nuclear plant steam generator replacements are difficult in the best of circumstances. Entergy had to face component delays, staffing shortages, and even a hurricane while upgrading its Waterford 3 plant. Sterling teamwork and project management brought the operation to a successful conclusion.

In 2007, Dominion Resources contracted Alstom to perform steam turbine retrofits on two generating units at its North Anna nuclear power station. The Unit 1 retrofit, with its ongoing instrumentation upgrade, was the second to be completed at the North Anna plant and the fourth overall for Dominion. Completion of this project marked a significant milestone in terms of both technical achievement and investment in providing clean, safe, and reliable baseload electricity for Dominion customers.

With license extensions for its three units in hand, Duke Energy’s Oconee Nuclear Station began a digital controls upgrade program in 2006, and in January 2010, AREVA became the first supplier to receive Nuclear Regulatory Commission approval for a safety-related digital instrumentation and controls system. That set the stage for the first digital control system in a U.S. nuclear plant.

Since the beginning of the U.S. commercial reactor industry, regulatory agencies have required that nuclear power plant designs take into account the potential threats posed by natural hazards such as earthquakes and floods. The tsunamicaused disaster in Japan in 2011 prompted renewed attention worldwide on these hazards.

Enriched uranium, the most commonly used fuel in commercial nuclear reactors worldwide, has many well-known advantages; however, recent events have underscored its disadvantages. Can new fuel technologies be developed and proven effective fast enough?

Highly touted by the U.S. nuclear industry and heavily funded by the U.S. government, small modular reactors have largely entered the realm of mythology in this country, slipping into the mists of economic impracticality. Not so elsewhere in the world, where some real projects are under way.

Nuclear plant structures are designed to withstand extreme cold weather conditions. However, a winterization program, such as those shared by Byron and D.C. Cook power plants, can ensure critical operating systems are prioritized and protected from freezing during low ambient temperature conditions. 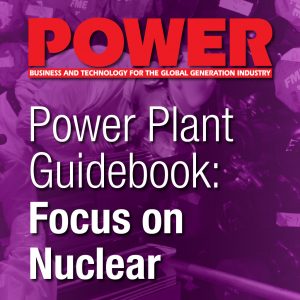