The BIG PICTURE Guidebook: A compilation of articles from 2017

The BIG PICTURE, POWER magazine’s monthly infographic series, visualizes prominent power generation trends and issues from around the world. Now, find all of these 2017 articles in one compiled guidebook.

Delivered in a PDF format.

Presidents on Power
Over the last 50 years, each new administration has offered a new set of regulations and policies that affected the power sector. Especially since the establishment of the Environmental Protection Agency (EPA) by the Nixon administration, power plant rules have multiplied and evolved in scope and purpose.

The Nuclear Fuel Cycle
The world’s nuclear fuel cycle associated with the production of nuclear power is an intricate series of processes that starts with mining of uranium and ends with the disposal of nuclear waste. The “front end” of the nuclear cycle involves mining and milling, conversion, enrichment, and fuel fabrication. The “back end” typically involves temporary storage, reprocessing, and recycling before wastes are disposed. Here are key things to know about each stage today.

Shunning Coal
In the wake of the Paris agreement in December 2015, a number of governments are implementing (or considering) a phase-out or cutback of coal-fired power generation. Percentages show coal’s share of total generation in 2014.

Prevailing Winds
Total global installed capacity of wind power surged to nearly 487 GW at the end of 2016. Over the past five years, China has taken an ever-larger share of the market, dominating onshore and offshore installations in 2016. Chinese wind turbine manufacturers have also made big gains in market share in a sector increasingly characterized by mergers. In 2016, a “strong breakaway group” of three companies emerged within the world’s wind turbine market, “with a fairly tight field following,” noted David Hostert, head of wind research for Bloomberg New Energy Finance (BNEF), in February. Siemens Wind and Gamesa, which are in the process of merging, will join the “big four” dominant group, he said.

Pumped Storage
While the first documented use of pumped storage for power generation was at the Ruppoldingen plant in Switzerland in 1904, the modern era of pumped storage did not begin until the 1960s, following several major technological milestones. They included: installation of the first true reversible pump in 1956; the advent of
static frequency converter motor starting equipment; improved generator insulator systems; mechanical bearings; high-speed automatic controls; and commercial operation of a adjustable speed machine in 1996. How pumped storage is primarily used has shifted too. From the 1960s to the 1980s, projects were intended to support time-shifting of power from large baseload nuclear or coal plants. Deregulation of power markets and creation of spot markets later expanded pumped storage use for ancillary benefits. Over the past decade, pumped storage received another tremendous boost as a crucial resource to help integrate large amounts of intermittent wind and solar generation. At the end of 2016, about 159 GW of pumped storage was operational around the world. Here’s how cumulative installations compare among the countries with the world’s top
pumped storage capacity.

Generation Transition
Compared to 2009, in 2016, coal power generation across the U.S. decreased by 510 TWh. During that same period, natural gas generation surged by 439 TWh and non-hydro renewables generation rose by 195 TWh. However, those changes weren’t uniform across the U.S.

SO2 Success
Emissions of sulfur dioxide (SO2) from the U.S. electric power sector have fallen a dramatic 86% since the 1970s, owing to several factors such as the varying sulfur and heat content of coal, the heat rate of power generation, diminished generation from coal, and the growing share of coal plants that use flue gas desulfurization (FGD) systems.
Notably, since the 1970s when SO2 emission controls first became available, FGD costs have declined by nearly a third, and as of 2015 had been installed on 60% of the nation’s coal units. By comparison, fluidized bed combustion was installed on just 8% of units, and only three plants in the U.S. employed integrated gasification combined cycle technology. Here’s a look at how the power sector’s laudable environmental achievement came to be.

Nuclear Financial Meltdown
Cheap natural gas, stagnant power demand, and power prices that have fallen significantly since 2008 have jeopardized the economics of about two-thirds of the nation’s 100-GW nuclear capacity, according to a working paper from the Massachusetts Institute of Technology (MIT) Center for Energy and Environmental Policy Research. About
21 GW in merchant deregulated markets are retiring, or are at high risk of retiring the paper suggests. Here’s a profitability outlook for all 61 nuclear plants in the U.S. over the short term (between 2017 and 2019), according to the research entity.

Economic and Workforce Contributions
The Edison Electric Institute, an industry trade group that represents all U.S. investor-owned power companies, the American Public Power Association, an association for public power entities, and the National Rural Electric Cooperative Association, which represents the bulk of U.S. not-for-profit consumer-owned electric cooperatives, this
August released a report highlighting the economic and workforce contributions of the U.S. power industry. Here are its most significant findings. Data used to conduct modeling came from U.S. government sources and the Center for Energy Workforce Development.

The History of Power

Power Expenses
The operating expenses at major U.S. investor-owned electric utilities have shifted over the last decade or so, owing primarily to changing fuel costs. The “Hydro” category consists of both conventional hydro and pumped storage, and the “Gas turbine and small-scale” category includes gas turbines, internal combustion, photovoltaic, and
wind plants. Expenses are calculated as averages weighted by net generation, and they are measured in mills/kWh (a mill is a monetary cost and billing unit equal to a tenth of a U.S. cent).

Global CCS
In a November report, The Global CCS Institute said carbon capture and storage (CCS) is the only technology able to decarbonize the industrial sector. To reach the Paris Agreement’s target to keep global atmospheric temperature increases to below 2 degrees Celsius, 2,500 CCS facilities will need to be operational by 2040, with 14% of
cumulative emissions reductions coming from CCS. Yet, to date only 17 large-scale CCS facilities are operational globally, capturing more than 30 million tonnes per annum. Only two are at power plants. No large-scale power plant projects are now under construction or even in advanced development, though a handful of projects are in early
development. While these projects may benefit from the declining costs of deployment and profitability of CCS, which has been demonstrated in the power sector, their success will rest on a number of factors, including government support. 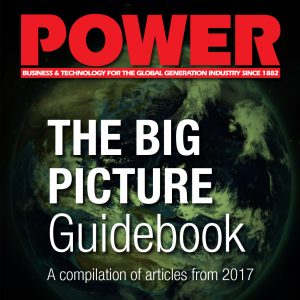 You're viewing: The BIG PICTURE Guidebook: A compilation of articles from 2017 $197.00
Add to cart