Delivered in a PDF format, 68 pages.

The use of longer steam turbine last-stage blades (LSBs) reduces the number of low-pressure casings and, thus, a turbine’s total installed cost. In many cases longer blades extract more energy from low-pressure steam before it enters the condenser and improve a turbine’s overall thermodynamic efficiency. But creating longer blades requires forsaking conventional design techniques for complex aerodynamic analysis of stationary vanes and rotating blades. Has the market push for longer LSBs exceeded current technology limits? Does the industry conduct proper analysis to determine when using longer blades is beneficial or not?

The challenge for suppliers of aftermarket turbine blades is that their starting point is an existing blade and nothing else. There are no CAD models, drawings,
measurements, tolerances, or inspection data associated with it. However, thanks to the latest in computer tools, a blade now can be digitally recreated to
exact specifications and built using the latest design and manufacturing practices. Here’s an inside look at how turbine blades are captured, reconstructed,
inspected, and remade to be better than the originals.

On-line temperature monitoring of steam turbine rotors must be based on modeling thermodynamic processes—not direct temperature measurements. Good operating
decisions can significantly extend the life of aging turbines, particularly those that are routinely cycled or operated at their maximum ramp rates.

Contrary to public belief, the most common electrical phenomenon produced by a power plant’s steam turbines, turbine-driven compressors, and pumps isn’t sparks or lightning bolts. It’s static electricity. The physical effects of static electricity— greater vibration and higher temperatures—can damage bearings, shaft journals, couplings, and gears enough to cause a forced outage. A few inexpensive instruments in the hands of a well-trained technician can prevent “frosting” and “worm tracks” in your babbitt bearings. We’ll start the training right now.

By design, combined HP-IP turbines have a small amount of internal leakage from the high-pressure turbine to the intermediate-pressure turbine. When turbines are
new, the amount of this leakage is close to the design heat balance. But as turbines age, the leakage increases considerably, causing a heat rate penalty and possibly a reliability problem. In Part I, we explore the symptoms and causes of excessive leakage within GE steam turbines and how to correct the problem.

By design, combined HP-IP turbines have a small amount of internal leakage from the high-pressure turbine to the intermediate-pressure turbine. As turbines age, the leakage increases considerably and becomes excessive, creating a heat rate penalty and possibly a reliability problem. Last month we explored the symptoms and causes of steam leakage within GE steam turbines and how to correct the problem. In Part II, we examine the same issues for Westinghouse and Allis-Chalmers turbines from both theoretical and practical angles.

Nobody expected driveline vibration to occur after a flawless retrofit of a 200-MW steam turbine. But when it did, Mitsubishi Power Systems and Exelon vibration
specialists identified the symptoms and rapidly narrowed the list of possible causes. Confounding factors made the root cause difficult to identify, but the experts pinpointed the problem, made necessary hardware modifications, and placed the turbine back in service in a week.

An increasing number of low-pressure steam turbines—especially at supercritical fossil units—have experienced stress corrosion cracking in the blade attachment
region of their low-pressure rotors. Approaches to solving this problem range from redesign of the attachment and blade replacement to in-situ weld repair. Regardless of the procedure selected, the solution must completely restore the turbine performance while minimizing outage duration.

Carbon emissions produced by the combustion of coal may be collected and stored in the future, but a better approach (in the near term at least) is to reduce the
carbon produced through efficient combustion technologies. Increasing the efficiency of new plants using ultrasupercritical technology will net less carbon released per megawatt-hour using the world’s abundant coal reserves while producing electricity at the lowest possible cost.

Steam turbines convert the thermal energy in motive steam to rotating mechanical energy, and the generator converts that energy into electrical power. One important requirement for safe and reliable operation is preventing water induction in the steam turbine and avoiding water hammer in the steam piping system. ASME standards present the design guidelines for removing moisture from steam lines; this article explains a practical design process.

Steam turbine blade cracking often suggests the need for an upgraded blade design. Follow the process of reversing engineering a failed blade to produce a more
reliable and efficient design.

Steam turbine rotors bend during operation, but the bearing and supports are designed to keep the static and dynamic forces under control. However, bending
can cause impact between stationary and rotating parts—often cascading impacts. An operator of many utility-scale steam turbines shares its extensive field experience identifying the root cause of failures as well as successful solutions.

The fundamental design principles and process for modern steam desuperheating, or the attemperation of superheated steam in the power generation industry, have
been evolving since the early 1930s. Meeting the requirement for steam quantity, quality, and temperature consistency is the foundation of traditional attemperator component design, particularly for fast-response combined cycle plants. 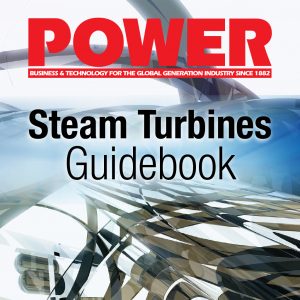