Top coal plants face very different regulatory and market conditions that are factors of their geographic location, but all are dedicated to cleaner, more efficient operation. This 69 page PDF guidebook provides a detailed breakout on what’s working.

Hungary’s largest coal-fired power plant is a model of efficiency and environmental impact despite its 1960s-era vintage. Continual upgrades have kept the plant running smoothly, and a modern dense slurry ash-handling system keeps combustion residuals under control and allows for a zero liquid discharge posture.

South Africa began mothballing coal-fired plants almost 25 years ago when reserve margins were high and independent power producers (IPPs) were invited to invest. Ten years later, mass electrification, rapid industrialization, and low power prices that failed to attract IPPs caused reserves to dip to dangerous levels. Camden was one of three coal plants brought out of retirement to keep the lights on.

Think your project was tough? Tokyo Electric Power Co. (TEPCO) finished one of the world’s most efficient coal-fired power plant on time despite a 9.0-magnitude earthquake that devastated both the site and much of the country.

The nine-unit Mundra thermal power plant is one of the largest coal-fired plants in the world, but it takes up minimal space and uses both fuel and water efficiently.

Operating a coal-fired plant of any sort in India is a challenge these days, but Sesa Sterlite’s 1,215-MW plant is also tasked with supplying vital power to an adjacent aluminum smelter. Despite a difficult regulatory environment and ongoing coal market difficulties, the plant has not just met expectations but has risen well above them.

Although Germany’s Energiewende is all about reducing consumption and transitioning from nuclear and fossil fuels to renewable energy, it hasn’t completely halted the development of new coal-fired facilities. The Lünen plant demonstrates that even in countries keen on renewables, coal is still an important resource.

With a mandate to cut emissions, improve efficiency, and increase output, Duke set out to replace the four World War II–era units at Cliffside Steam Station with a modern, state-of-the-art supercritical plant. The result was one of the cleanest, most efficient coal plants in the country, with twice the output and half the emissions of its predecessor.

The 1,600-MW Prairie State Energy Campus uses the latest coal technology to burn Illinois coal from the Lively Grove mine, located adjacent to the plant. In planning since 2001, the second unit of the two-unit, $4.93 billion plant entered commercial service in November 2012, thus completing the largest coal-fired plant built in the U.S. in 30 years.

A modern coal-fired power plant may operate with a thermal efficiency of 40% to 45%, which means that 55% to 60% of the fuel energy entering the plant is rejected as waste heat up the stack or to the condensing system. Economic recovery of that low-level energy has stymied plant designers for years. Shentou Second Power Plant presents an excellent solution.

India’s state-owned generator NTPC operates a large fleet of power plants across the nation, and one of its top performers is found outside the capital of New Delhi. Staff at NTPC Dadri have taken a proactive, innovative approach to maintaining their plant, making it one of the most efficient in India despite its 1990s vintage.

Building a power plant on a site previously used for an aquaculture farm comes with more than a few challenges. For the Tanjung Bin Energy Power Plant, that meant some redesign and rework was required. Even so, the GE-led construction consortium made adjustments and delivered the state-of-the-art ultrasupercritical project on time and on budget.

While it’s true that coal ash can be an environmental hazard if it’s not properly managed, there are a lot of positive uses for coal combustion products that actually provide benefits to the world. Many beneficial uses have been around for decades, but valuable new options are being developed, and some are starting to make their way into the market.

Alliant Energy and its co-owners are investing $900 million to modernize the Columbia Energy Center with a new suite of air quality control equipment and plant improvements that will increase its output and efficiency while reducing emissions. The plant makeover ensures its continued operation for decades to come.

Ultrasupercritical technology is the current gold standard for coal-fired plants, but Malaysian national utility Tenaga Nasional Berhad had some unique requirements for its newest, most efficient plant. With a client lacking an indigenous source of coal and needing wide fuel flexibility, Alstom delivered a state-of-the-art plant that can handle an enormous variety of coals.

Alliant Energy recently completed a major renovation of the Ottumwa Generating Station to improve air quality, plant reliability, and efficiency. By doing so it also reduced its carbon footprint by ~5.6%.

One of NTPC’s first coal-fired facilities, the 2.6-GW Ramagundam plant, is aging well, delivering noteworthy performance metrics that distinguish it from other plants in the state-owned generator’s big coal fleet.

In a nation seeing breakneck growth in its power sector and a drive toward cleaner, more efficient generation, coal remains the backbone. That means hard work is ahead for China in power sector innovation, and a plant in Shanghai is leading the way.

A desire to do things right led Constellation Energy to invest $70 million to convert its 400-MW C.P. Crane Generating Station to burn Powder River Basin coal and develop the culture critical to making that conversion a success. In addition to being named a 2012 POWER Top Plant, the PRB Coal Users’ Group recognized the plant for its efforts with its Plant of the Year Award.

To comply with the New Hampshire law governing mercury emissions, Merrimack Station management recently installed a single scrubber system on the facility’s two coal-fired boilers. The plant’s Clean Air Project was completed on Mar. 30, 2012, ahead of schedule and under budget. Now the 440-MW Merrimack Station has reduced its mercury and sulfur dioxide emissions by more than 95% and is one of the cleanest coal-fired power plants in the nation.

Since the Northside Generating Station’s two repowered units were placed into service in 2002, a series of modifications and repairs have been undertaken to make its two circulating fluidized bed boiler plants reliable. The two chief problems were ash agglomeration on heat transfer surfaces and poor Intrex heat exchanger performance. JEA reports these problems have been permanently resolved, and data shows the two units have joined the top tier of reliable fossil plants.

The insatiable power demands of a huge modern metropolitan area like Seoul call for both big thinking and flexibility. The successful launch of this large, state-of-the-art supercritical coal plant required adapting to unforeseen changes in fuel supply while meeting highly restrictive environmental controls. The resulting high-availability facility is a POWER Top Plant. 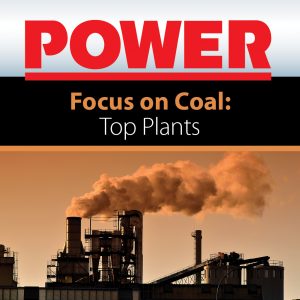